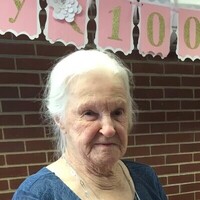 Bernice Huston Brooks, 105, a former resident of Blandinsville and Sciota, passed away Saturday evening, May 28, 2022 at The Elms in Macomb, Illinois. She had lived in Macomb since 2009.

She was born on February 26, 1917 in Edina, Missouri to Earl Alonzo Ren and Marion Russell Ren. At age six, she moved to Illinois with her parents and three brothers. Bernice and two of her brothers lived most of their lives in McDonough County. At age 13, she became a baptized believer of the Lord Jesus Christ.

She married Kerman Russell Huston in January 1933 and they had three children, Ronald John (Elaine) Huston, Carolyn Kay (Jack) Waller and Stephen Russell Huston, who died tragically at the age of 19. She worked for A&P Grocery for eight years and for Bower Manufacturing for 13 years. Kerman died in 1970. She lived most of her life on a farm.

She was preceded in death by her parents, the father of her children, two sons, three brothers, three sisters-in-law, a great-granddaughter, Angelina May Huston, 3-years-old, a son-in-law, Jack Waller, a stepdaughter, Mary (Maurice) Morita, two nieces, and Guy Brooks, whom she married in 1976. He died in 2009.

Dodsworth Piper Wallen has charge of the graveside service at Oakwood Cemetery scheduled for Friday, June 3rd, at 10:00 am. There will be no visitation. Please sign guestbook or leave condolences at www.dodsworthfh.com