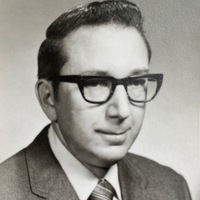 Delmar enlisted in the Army Air Corps at 17 and served his country as a Radio Mechanic and Radio Maintenance Chief. His tour of duty took him to Japan, Okinawa, Philippines Islands, Biak, Moratia, New Guinea, Rabaul, Guadalcanal, Guam, and finally back at home. He was awarded the WWII Victory Medal, the Army of Occupation Medal, Asiatic-Pacific Campaign Medal and Good Conduct Medal.

After returning from the Pacific Theater in World War II, Delmar worked for Iowa Southern Utilities Electric as a lineman, installing electricity to rural Iowa. He and Martha moved to Bettendorf, Iowa where he pursued a career in automotive technology.

Eventually Delmar chose to attend college at Western Illinois University in Macomb, while a student minister to Center and Jerusalem United Methodist churches. After graduation, he taught industrial arts courses at Moline Senior High School and then Carl Sandburg College where he developed the Auto Technology department.

In 1975, Delmar and Martha moved to Belmont, WI, where he pastored the U.M. Church while attending the University of Dubuque Theological Seminary. He graduated with a Masters of Divinity degree in 1977. Delmar later earned a Doctorate of Divinity degree as well.

In 1978, Delmar and Martha moved to Grayslake, IL where he organized and developed the Auto Technology Program at the new Lake County Area Vocational Center. In 1983, they moved to Centralia, IL where he taught at Kaskaskia College for 11 years before retiring in 1994.

Delmar spent his retirement years enjoying his many hobbies and his grandchildren. He felt blessed to have his family and the wonderful adventures experienced in his lifetime.

Graveside Services will be at 1:30 PM Saturday Oct. 1, 2022 at Oakwood Cemetery. Rev. Lyren Haney will officiate. There will be no visitation. Memorial Contributions may be made to the Jerusalem United Methodist Church. Dodsworth-Piper-Wallen Funeral Home is in charge of Arrangements. Please sign guestbook or leave condolences at www.dodsworthfh.com