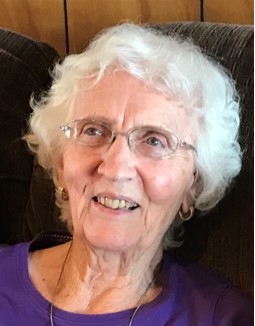 Elizabeth Ann Whisler McGrew, 89 of rural Avon, Illinois passed away at 11:38 a.m. Saturday, July 16, 2022 at home. Elizabeth was the youngest of nine children born to Melvon R. and Nora Belle Hatch Whisler on August 7, 1932 at her parent’s farm home at the north end of Crawford Street, Bushnell, IL. She was united in marriage on December 16, 1951 in Bushnell to James Arthur (Jim) McGrew with whom they had sixty-three wonderful years together. Jim proceeded her in death on January 5, 2015.

Elizabeth was very active in high school, working on the school newspaper, yearbook, chorus and Girls Athletic Association. She was also elected Junior Class president and Homecoming Queen. “Modest, quiet and self-reliant – the maid with the winning smile,” was the caption beside Elizabeth’s senior yearbook photo; an accurate description of her whole life.

Everyone, from friends to strangers knew her as a fabulous cook. She was always open to throwing in another potato in the kettle and another plate on the table. She was especially known for her apple, blackberry and custard pies and fried chicken and meatballs. She was honored as Cook of the Week in the McDonough Democrat. She was also a talented seamstress who could sketch an outfit from a local store window and then redesign a pattern to create the garment for her daughters. The garments she made were meticulous, looking almost as neat on the inside as outside. But you would never hear her boast, seldom acknowledging her talents. Elizabeth was a hard worker, helping with the livestock and crops on the family farm, canning and freezing the produce from a large garden and fruit trees. All benefitted from her kindness and selflessness. For example, when given choices about her 85th birthday party she replied “whatever the kids will like.” As a faithful member of Walnut Grove United Methodist Church, Elizabeth taught Sunday school, organized crafts for Bible School, served in multiple capacities in the United Methodist Women’s group, and always contributed multiple food items for potlucks, funeral dinners, etc. Elizabeth was a Township Election Judge, canvassed for American Heart Association, a member of Home Bureau, the behind the scenes 4-H Leader assist to her husband and she and Jim had loads of fun for over 50 years playing 7-point pitch with their community card club friends.

Visitation will be held from 5:00 until 7:00 p.m. on Wednesday, July 20 at Martin-Hollis Funeral Home, Bushnell, IL. A celebration of life will be held at the Walnut Grove United Methodist Church at 10:30 a.m. on Thursday, July 21, with burial following in the Avon Cemetery. Memorial contributions may be made to the Walnut Grove United Methodist Church or Western Illinois Youth for Christ. Please sign the guestbook and leave condolences at www.martinhollisfh.com