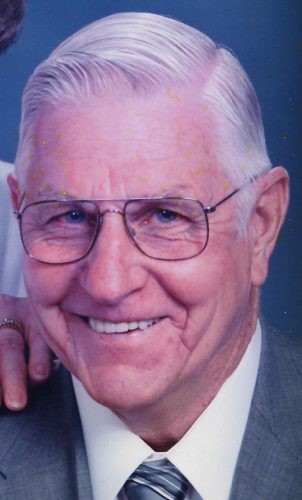 A public visitation will be held from 8:30 – 9:30 a.m., Monday, January 30 at Rux Funeral Home in Kewanee. A private Mass of Christian Burial will be celebrated at Saint John Paul II Parish. Celebrant will be Fr. Johndamaseni Zilimu. Burial will be in Mt. Olivet Cemetery. Memorials may be directed to Cornerstone Community Wellness.

He was born February 12, 1935 in Neponset, the son of George E. and Mabel (Heise) Ouart. He married Elizabeth J. “Betty” Verbout on June 16, 1956 at St. Joseph’s Catholic Church in Kewanee and she preceded him in death on April 8, 2021. Survivors include his five children; Tim (Josie) Ouart of Sheffield, Angie (Glen) Stanton of Murrells Inlet, SC, Jenny (Craig) Schroeder of Toulon, Bob Ouart of Lewisville, TX and Bonnie (Steve) Spahn of Kewanee, five grandchildren and seven great grandchildren. He was also preceded in death by his parents, his sister, Corrinne Pratt and two sisters in infancy.

George served his country in the Illinois National Guard. He worked as a dairy farmer in the Neponset and Kewanee area until 1984 and was head of maintenance for Kewanee Schools, retiring in 2002. He also worked at the Kewanee Sale Barn and was a delivery driver for Hillside Florist for several years. He was currently a member of Saint John Paul II Parish and in his earlier years was a member of the former St. Joseph and St. Francis of Assisi Catholic Churches. He was an avid Chicago Bears fan who enjoyed traveling with Betty, trips to the riverboat, doing word search puzzles and having coffee at Burger King. Most of all, he especially loved his family and enjoyed the time spent with his children and grandchildren.

This obituary may be viewed and private condolences left at www.ruxfuneralhome.com.