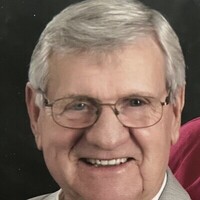 He was preceded in death by his parents, Howard and Bessie John, a son, Gregory John, and two sisters, Erma Sester and Kathryn Akers.

He served in the Navy during the Korean War. He worked for Peter Pan Bread, Prudential Insurance, Kelly Pontiac Buick Car Dealership and owned and operated Macomb Skateland from 1969-2008.

His passion was owning, training and racing harness race horses, which he found much joy and success.

He was actively involved in city politics in the late 60’s and 70’s as a 4th ward alderman, where he served on many committees, most notable was the city waterworks.

He also served as Mayor Pro tem for Russell Good.

He was a member of St Paul Catholic Church, the Macomb VFW, American Legion, Macomb Elks Club and the Illinois Harness Horse Association.

A Funeral Mass will be held at 11:00 AM Wednesday December 28, 2022 at St. Paul Catholic Church. Father Joseph Domfe will officiate. Visitation will be held Tuesday December 27, 2022 from 5:00-7:00 PM at Dodsworth-Piper-Wallen Funeral Home. Memorial contributions can be made to MDH Hospice, Wesley Memory Care, and St. Paul School. Please sign the guestbook and leave condolences at www.dodsworthfh.com.