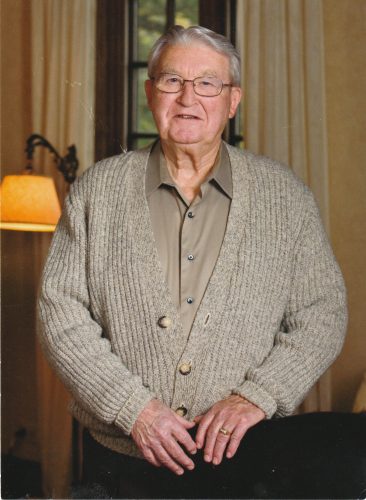 Raymond Fayhee, 94, passed away September 1, 2022 of heart failure. Raymond was a resident of Bushnell, Illinois. He was the last surviving grandchild of Jack Fayhee who immigrated to Fulton County, Illinois from Ireland in the mid-1800’s.

Raymond was born in Lewiston, Illinois on September 24, 1927 to Patsy and Lina Dale Fayhee. In 1944, at age 17, he enlisted in the United States Merchant Marines where he served until the end of WW II. He then joined the United States Army and served in Japan as a member of the Occupation Forces. On his return from Japan he joined the Illinois National Guard and served until 1952.

Raymond married Charlotte Jones, also from Lewiston, in 1948. They had four children. Charlotte died in 2009.

Following his service in the National Guard, Raymond joined the family business founded by his uncle John, distributing agricultural farm equipment. His specialty was engineering and constructing irrigation systems. Raymond remained with this business until 1992 when he and his brother Bernard formed R&B to conduct a real estate business. In the final years of his life Raymond founded a family partnership with his four children to acquire and manage agricultural land in West Central Illinois.

He was preceded in passing by his parents Patsy and Lina Dale, his wife Charlotte, his older sister Twila, and his younger brothers Bernard and Patrick (‘Tweed’). He is survived by his four children (Mike/Janice, Patrick/Jeanne, Linda/John, and Jaelene/Jeff), eight grandchildren, and thirteen great grandchildren, sister Sandy Butler, and numerous nieces and nephews.

Graveside services will be held at 11:30 AM Friday September 9, 2022 at the Oak Hill Cemetery in Lewistown, IL. Visitation will be held Thursday September 8, 2022 from 5:00 until 7:00 PM at the Martin-Hollis Funeral Home. Memorial contributions can be made to the Bushnell VFW, the Bushnell Rescue Squad, or the Bushnell United Methodist Church. Please sign the guestbook and leave condolences at www.martinhollisfh.com